As a gay dude in a committed relationship, I often take for granted the plight of all the single ladies out there, in search of a good man to settle down with/settle for. But I feel it is my duty as a non-stereotypical gay best friend to look out for my lady friends’ interests and give them hope that they, too, will be able to have a stable, loving, and committed relationship with a guy, even if he is a blatant homosexual. I say this because, according to a recent ranking of the “50 Best Cities to be Single In,” based on a Facebook survey, ladies in my current city of New York are totally screwed.

Ladies, remember that knowledge of graphs is almost as sexy as desperation.

Being a Political Science expert, I’ll help break down this very accurate and not-dumb survey, and what it means for all of you single ladies concerning your abysmal chances to procreate:

I Know Why the New Yorker Rushes

New York is known for a few things: wonderful and innovative food; the world’s best art and fashion; and terribly, horribly rude people who are always in a hurry. Coming from Montana the mere mention of New York will set Ma or Pa off on a tirade about how “them people dun’ know how ta just settle down an’ be nice for one gosh durn minit!”  Even people who have never been in New York nor really interacted with a New Yorker will discuss at length with you the problems of those awful East Coasters and their refusal to act with a modicum of politeness.

And to an extent, they’re right.

The thing is, if you move to New York you are often in a rush, and you do get a bit ruder. You have to. But it’s not because you get sucked into some sort of respect-stealing black hole, or because the city is located on top of a portal to Hell, a la Buffy; the problem is that so much of being in New York is about waiting.

Let me explain: when I lived in Montana I lived seven miles out of town. This means that to drive to me (and pretty much everyone I know had a car or had access to a car) took roughly 15 minutes — maybe 30 minutes if they lived on the opposite side of town and it was snowing and there was traffic AND they happened to stop and watch a group of deer grazing on the way. Living where I did, I often had friends tell me they didn’t want to come over to my house because it “took so long to get there.”

Fast forward a mere month to New York, where I discovered that the first apartment I moved into was a mere 15 minutes away from the first friends I made in the city and we all did a little dance, because, suddenly, being 15 minutes away was amazingly close.

So, you see, New Yorkers don’t rush because they are self important; they rush because they waste so much time not moving at all. Meeting a friend for a quick cup of coffee doesn’t really happen in New York because getting to that coffee shop often takes twice as long as the meeting itself, and who wants to do that?

When we discuss why New Yorkers rush, we must discuss the rudeness — ah yes, the signature trademark New Yorker attitude. The rudeness is born not of spite but of futility. If you have never lived in New York or an equally bustling metropolis you will never understand the fury that overcomes you when two people with suitcases decide to waddle down the sidewalk, side-by-side, at the speed of molasses on a Canadian winter day. Sometimes walking through the streets of New York make me feel like I’m in the labyrinth and have to get past the minotaur, only there isn’t a single minotaur; there are seven million immensely slow hulking creatures blocking my path and ensuring my loss of sanity.

This is what the population of New York looks like to me now.

It’s like Chinese water torture: one slow person, ten slow people, you can deal with, you move past them without a second thought. But at some point, maybe around 6,723 humans that seem intent on being nothing more than fleshy roadblocks, someone moving slower than my grandma does in her walker is liable to make the bile rise up your throat and into your eyeballs.

And what about stopping in the street to check your directions? If you need to find out where to go, I don’t begrudge you for pulling out your map or smartphone to check your location — I once got lost for two hours shortly after moving because I thought I was going south when I was going east — but if you’re going to do that, do it while leaning against a wall, not at the top of the bloody stairs!

Every New Yorker tries to exert some sort of force over their own transit-fate because, ultimately, they are powerless. Finding the worst place to stand in the entire department store and slowing everyone down isn’t done out of ignorance; it’s raising your fist at the heavens and shouting, “You see? I can do that too!” And then desperately sobbing. 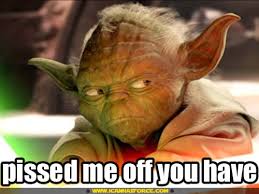 While we’re on this subject, let’s talk about honking, a side effect of the fact that sometimes automobiles seem to lurch slower than a senior pushing a shopping cart down the sidewalk. Only, when talking about honks we must talk like Yoda. “Honks lead to anger; anger leads to fear; fear leads to the Darkside. Born of the Darkside, honks are, and lead to the Darkside, they do. Only causing more honks, honking does.”

The truth is New Yorkers are ruder sometimes, yes. We can’t deny it. This is not because of some miasma of anger lurking in the streets; it’s just because getting around this city is such a pain in the butt.

“A New Yorker doesn’t rush because it has a destination, it rushes because the lady in front of it has just gotta move.”

I know why the New Yorker Rushes

And gripes and sneers at windows,

Empty Starbucks in his hand.

No taxi in sight again and

The Q train has not arrived in so long.

She wishes for freedom

A way to escape these endless avenues.

or even a lawnmower.

The saga continues with the second of three parts of chapter one. Which might just be the only chapter I post. Also, this is much shorter than the first because the third section is a good deal bigger and I didn’t want to separate it more. END_OF_DOCUMENT_TOKEN_TO_BE_REPLACED

Tomorrow, I’ll be wrapping up my three week journey to New York. Now, while I won’t pretend to know everything about New York, I have come to two conclusions: firstly, New Yorkers are just like Montanans, including the fact that each group looks down on the other group as having a backwards, curious way of life; secondly, New Yorkers don’t know the difference between Montana and Wisconsin.

Wisconsin and Montana are so far apart that even a map of all of Wisconsin’s neighboring states don’t show up! Gold star if you know where Montana would go if this map was extended, though!