In the last month, there’s a new app that has come and taken the world (or at least the interwebs) by storm. Its name: Snapchat. As with all those other popular apps that become briefly popular and are not far from being uttered on the lips of the tech savvy, Snapchat has a certain whimsy and simplicity to its concept that makes it charming. Unfortunately, it’s also terribly dumb. 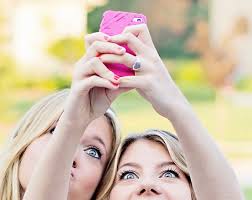 This is the 100% real picture associated with Snapchat from the app creators. “Ohhh girl, look! Pictures through my phone! That’s, like, sooo unique!”

The concept of Snapchat is simple: it’s a quick way, through your iOS devices, to send pictures to your friends. Sounds nifty, right? Who doesn’t love sending people pictures? Nobody, that’s who!

However, there is a dark truth to Snapchat, and that black veracity is that Snapchat is both redundant and inferior to iMessages. It’s like what North Dakota is to Montana — just as many tiny towns, less impressive cities, and noting but flat wastelands.

It’s redundant because, well, you can already send pictures through iMessages. Actually, you can send pictures through many apps, and some of them even make the pictures more unique, like The Dragulator. It’s inferior because the gimmick that makes Snapchat unique is that Snapchat only sends someone an image for a second or a few seconds, depending on the sender’s settings.

If this sounds fun to you you are insane. More than being useful, this is the equivalent to some valley girl saying, “OMG look at this!” flashing her phone to you, and then pulling it away before you have any idea what you just saw, all in one app! Hooray!

So there we have it: Snapchat, the worst app ever. There is, however, one potential use to Snapchat, as pointed out by a friend of a friend; you can send dirty pics on Snapchat without fear of them being spread around  — unless the receiver knows how to quickly do a screen capture… Okay, it’s still useless.